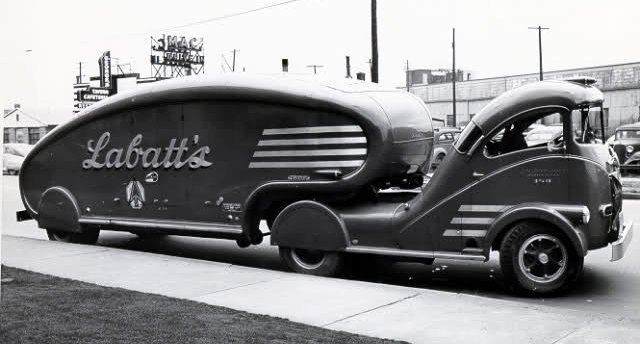 Rounding out the corners, smoothing the edges, and getting the airflow smoothly over the cab and out over the trailer helped fuel economy a good amount. These and similar modifications are being made on freight trucks, in order to save fuel through improvement of aerodynamics.

Despite the fact that the conventional, or long-nosed truck was almost always more aerodynamic than the older cab over engine design, simply because it’s frontal cross-sectional area – the parts that get pushed into the slipstream – are multiphasic, in many countries we see almost exclusively trucks with COE design. It is because of the strict regulations regarding the size and weight of the freight trucks, especially the limited length. When talking about fuel efficiency in the trucking industry, FREIGHT efficiency is the proper metric. (Units of freight-ton-miles-per-gallon or ton-km-L are most often talked about.) In other words, the limited dimensions of a freight truck must be used for the cargo not for the cab.

Further research showed that smoothing out the underbody, and even adding a boat tail to the back of the trailer all contribute to better laminar airflow.

In 2015 Canadian research proved fuel efficiency of rear trailer fairings. National Resource Council of Canada has determined the combined use of a rear fairing and trailer skirt provides a 10 percent increase in aerodynamic efficiency above the sum of the individual products. They say a key finding of the study revealed that “side-skirts and boat-tails provide the greatest drag reductions” among the devices studied.

In Europe Mercedes also unveils an aerodynamic new semi-trailer. The “Aero Trailer” sports a number of small design improvements that allow it to cut through the air more easily. The two most significant features are those side trim panels, which reduce resistance by 8%, and the tapered rear end, which contributes another 7% reduction. The “Aero Trailer” is still just a design concept, but Mercedes says its features would result in a 5% fuel savings.

Photo of a Don Burr truck outline as designed for the European market. This truck is still too high and lacks the proper length to form a boat tail to get the 0.13 CD shape needed for our high speed 90 MPH rural interstate highway paradigm.

The US Department of Energy recently announced awardees under the SuperTruck program – funded in part by the American Recovery & Reinvestment Act of 2009 (i.e., the Stimulus Bill) – to improve the freight-fuel-efficiency of Class 8 trucks by 50%. These projects have reshaped the cab of the truck too, and significantly exceeded the 50 percent SuperTruck program goal set by the U.S. Department of Energy.

Similar project were/are running in Europe, where super aerodynamic semi-trucks were registered for road freight transportation, but remain a rarity on the European roads. The Swiss Colani-designed tractor-trailers look more like a spaceship than a truck.

The smart changes in the aerodynamics of semi-trucks result in doubling their mileage. An Airflow Truck with a 65,000 lb. load averaged 13.6 from Connecticut to California, way up from the average 6 mph average.

The WAVE truck (Walmart Advanced Vehicle Experience) weighs two tons less than comparable semis, has superb aerodynamics and a turbine engine. They want to double big rig MPG to 10, saving potentially $25,000 per year per truck. The one-of-a-kind prototype offers a whole package of firsts. The tractor has very advanced aerodynamics and is powered by a prototype advanced turbine-powered, range-extending series hybrid powertrain. The trailer is made almost exclusively with carbon fiber, saving around 4,000 pounds which can then be used to carry more freight.

Daimler Trucks North America recently unveiled its response – the Freightliner SuperTruck. It goes beyond the 50 percent figure, with a claimed efficiency increase of 115 percent. The truck was created through collaboration between Daimler-owned companies Freightliner, Detroit Engines, Mercedes-Benz, and Fuso. Much of its increased efficiency is due to better aerodynamics. This was achieved partly through a very streamlined tractor that includes features such as adjustable ride height, rear wheel fairings, articulated side extenders that bridge the gap between tractor and trailer, and ventilation slats in the grille that closes when the vehicle is traveling at highway speeds. In addition to the existing series-production vehicles, the SuperTruck from Freightliner shows how targeted measures in aerodynamics, energy management, the use of an intelligent powertrain and other levers can further reduce fuel consumption.

The Scania Truck concept from designer Adam Palethorpe besides of better aerodynamics uses innovative exterior elements which include high-tech fenders which show the duration for which the truck has been on the road. This is a clear indicator for other drivers of the duration since which the driver took a break. This may increase safety for other drivers on the road.

Aerodynamics of freight trucks can also be improved by truck-truck interaction. Platooning of trucks is an interesting concept too, which is using Vehicle-to-vehicle (V2V) technology-based system aims to boost safety, save fuel and reduce emissions, without re-shaping the currently used trucks or trailers. To platoon, trucks are to efficiently operate them on a highway in close proximity– one following after another at a pre-set distance via radar and wireless communication to form a virtual “road train.”

Menlo Park, CA-based Peloton Technology is the firm walking point for truck platooning. It’s developing a system that uses radar-based collision mitigation equipment and V2V communication technology to enable the close-in platooning of two tractor-trailers. Two at a time, though, is just for now.

Peloton’s technology uses vehicle-to-vehicle and vehicle-to-infrastructure wireless and radar to pair trucks to travel closely together. This creates an aerodynamic system but also a way for the trucks to communicate with each other to enable safe following, improved braking, and reduced fuel costs.

The platooned trucks were put through a modified SAE J1321 fuel-economy comparison test. The results showed a 10% fuel consumption reduction for the trailing tractor-trailer and a 4.5% reduction for the lead combination.

By the end of 2015 Denso Intl. the Japanese robot maker that also provides technology and components to the global auto industry funded the company; Intel and Lockheed Martin were also participants.

One thing is for sure, V2V communication technology will be spread out to the trucking industry. A better fuel efficiency by reducing fuel consumption of truck through improved aerodynamics is an engaging way. On the other hand, it would, of course, be ideal to reduce fuel consumption by avoiding wasting, to avoid wasted empty running of freight trucks at all, and exactly that is what we are working on at TrucksOnTheMap, but that is another story.